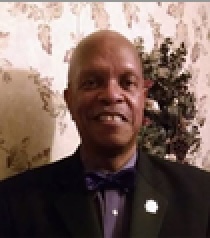 He was born on March 13, 1952 in New Orleans, the third of five children of Joseph James Beslin II and Charlie Mae Stephens Beslin. Growing up, Cornell was affectionately nicknamed “Butch” and was an avid swimmer. During the summer, Cornell and the rest of his siblings worked as lifeguards for the New Orleans Recreation Development (NORD) and the New Orleans Levee Board. Cornell attended Booker T. Washington High School and served as student body council president, and he was the sole representative from New Orleans in the leadership of Camp Rising Sun in New York.

Cornell attended college at Grambling State University and earned a Bachelor of Science in Computer Science. He enlisted in the Navy after taking a break from college life. He completed his first tour as a disbursement clerk on the submarine USS ORION (AS-18) and on Midway Island during his service. During this time, he married his college sweetheart, Maxine. After graduating, he began his career joining Southern Railway, later Norfolk Southern, as a trainee assistant and train master (responsible for safety) in several locations including: Birmingham, AL, Somerset, KY , Selma, AL and ending in Chattanooga. While in Chattanooga, he changed careers and worked as a payroll manager at Erlanger Hospital for 24 years, where he was recognized for his dedication to service and dedication to people.

Service to support and uplift others was in the soul of Cornell. Throughout his life, Cornell held many positions while attending Central Congregational United Church (New Orleans), Warren Chapel AME, and St. James AME (Chattanooga). He was a member of Omega Psi Phi Fraternity Incorporated [Gamma Gamma Undergraduate Chapter & Kappa Iota Graduate Chapter] where he held numerous leadership positions. In addition to his fraternity service, one of his many passions was supporting Tyner High, now Tyner Academy, football and basketball programs. He started the first recall club for the basketball team while creating videos to capture the events. As ‘The Voice of Rams’ footballer, he announced matches for over 20 years and provided excitement and commentary for the ‘Ram Train’.

A visitation will be held from 2 to 5 p.m. on Thursday, October 6 at the John P. Franklin Funeral Home. A memorial service will begin at 11 a.m. on Friday, October 7 in the chapel. Interment will be in Chattanooga National Cemetery.