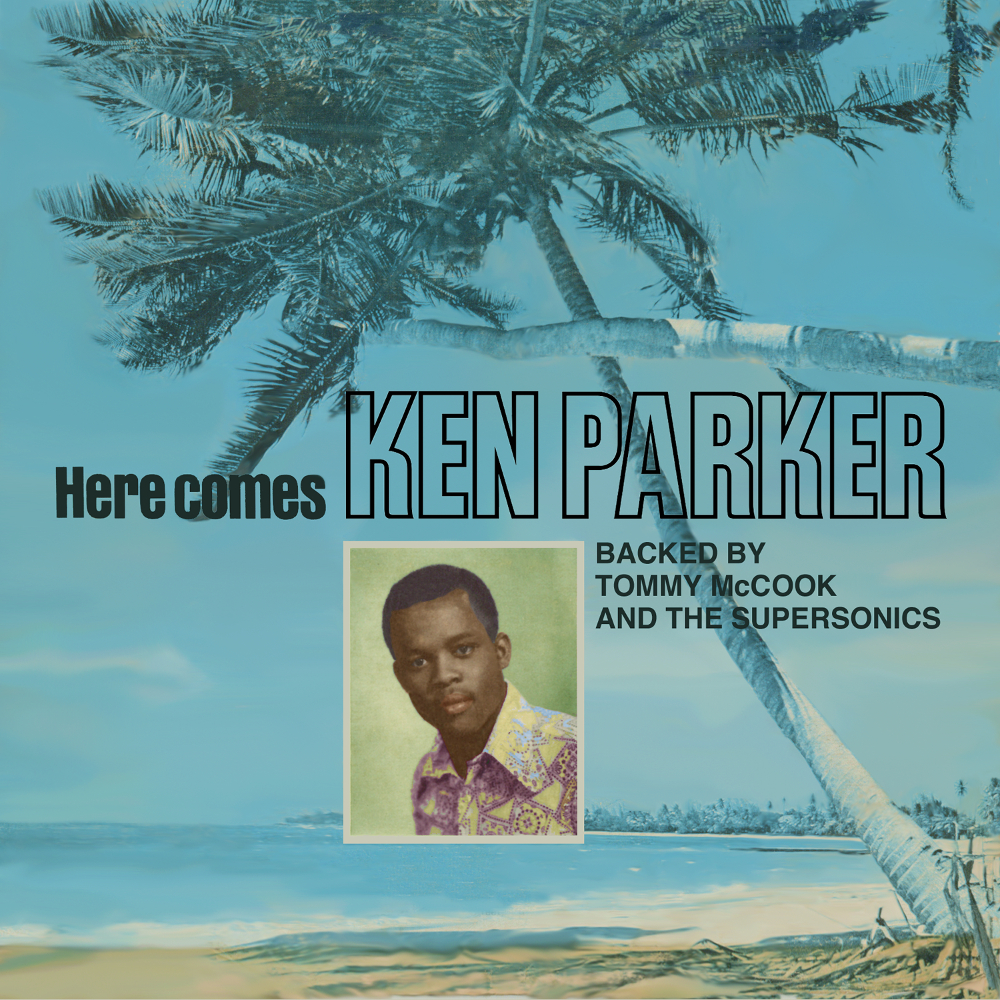 Reissue of singer Ken Parker’s popular 1974 album, released in the UK on Trojan Records as Jimmy Brown. The bonus features attached to this disc summarize all of Ken’s work at Treasure Isle and also include an in-depth look at Hopeton Lewis’ time with Duke Reid. Ian Canty is snooping around…

The church would play an important role in the life and development of Ken Farquharson aka Ken Parker’s singing. Born in Darliston, Westmoreland on February 23, 1948, he was baptized at the place of worship where his father was a minister. Young Ken first sang in the choir there and later joined the Youth Corps, which traveled to the area to perform. In the mid-1960s he was part of a trio called The Blues Blenders and they made their first studio visit to record the song Honeymoon By The Sea. This session was supervised by a Mr. Anderson, who dabbled in music from his electrical store in Kingston. The band then recorded for King Edwards on Rio Records towards the end of the ska era.

An audition for Studio One took an unexpected turn when only Parker showed up. Lee Perry was Coxsone Dodd’s right-hand man at the time, and when he heard the young man sing right away, he singled out Ken’s vocal talents as something Studio One could use. Ken began by backing Derrick Morgan on the singles It’s Alright and Gather To Gather Now in 1966, with The Blues Blenders name still in use. Eventually, he started out on his own with a few gospel-based versions. Also crushing the odd age-old record, in the rocksteady era, he moved on to Duke Reid’s Treasure Isle to record the excellent single True, True, True. He worked with Reid on and off until 1974 when Here Come Ken Parker was released.

On the LP, he’s backed by the assured talents of crack studio outfit Tommy McCook & The Supersonics, who, along with Treasure Isle’s recording setup, provided the perfect platform for any vocalist to shine. The first nine tracks on this disc are actually Ken Parker’s Here Comes album, with the omission of the three tracks from Supersonics, Soul Serenade, The Reggae and Inez, which were included to increase the length (a common practice on Kingston stage music). What remains is essentially a greatest hits style collection, with a range of unique Ken faces from 1968 to 1973.

This album begins with the cool, melodious version of Kiss An Angel Good Morning, originally cut by country singer Charlie Pride and a recent hit single from Parker. Next is the gospel-flavored Jimmy Brown, which reached number one on the Jamaican charts. Ken’s I Can’t Hide was recorded during the reggae boss year 1969 and is both upbeat and danceable. Mother’s Eyes and Sincerely, with the latter dueting with Dorothy Russell, are both self-written and reflect her talents in writing catchy, haunting material as well as singing.

Kris Kristofferson’s well-known number, Help Me Make It Through The Night, then receives a gentle reggae makeover, before True, True, True, simply an absolute classic. Ken’s confident and cool voice comes as the perfect complement to the top-notch rocksteady beat. The final two offerings on Here Comes Ken Parker are 1972’s I Catch Myself Crying, which has a very r&b flavor to it in its delivery, and the seduction of I Should Have Known.

In addition to the LP, there are three Ken Parker bonus items. Both Guilty Inside and Groovin’ In Style were recorded in 1971, the former has a good driving rhythm that makes it pleasantly upbeat and a lovely, delicate vocal marks the latter. The crude Sugar Pantie, which closes his tracks on this disc, may have seemed atypical for Ken in terms of subject matter. But it’s blessed with an original dance beat beat and its confident, soulful delivery.

While I was thrilled to finally get my hands on a Ken Parker collection, having enjoyed his contributions to various artist compilations over the years, his Treasure Isle recordings only represent the 12 tracks contained here. Indeed, Ken recorded sparingly, using built-in quality control that meant he only visited the studio when he felt he had something new to offer.

To bolster this thin but valuable archive, Doctor Bird chose to flesh out this disc with the work of Hopeton Lewis’s Treasure Isle. A talented singer, writer and arranger, he had a career similar to Ken’s, moving from reggae to gospel musically and from Jamaica to the United States physically. He was also a fellow Westmorelander, born there on October 3, 1947. It makes sense to put their Treasure Isle recordings on one collection and their work doesn’t clash with each other at all.

Hopeton’s record section begins Boys And Girls Reggae, a busy duet undertaken with the great Phillis Dillon. Later on the disc, a beautiful Get On The Right Track and Take My Heart undoubtedly prove the true chemistry of the duo on disc. Lewis’ brilliant 1970 solo effort Boom Shacka Lacka, which was a massive and deserved hit single, is truly wonderful. Live It Up, a solid original reggae groover from the same era, is carved to the famous Ali Baba beat and There She Goes comes with a bouncy, infectious tune. 1971’s (Respect) To The Other Man moves forward cleanly and lyrically, it’s kind of like an anti-Rude Boys record four years in advance. Then a mellow She’s Gone takes us right back to rocksteady pitch, with the following testimonial also a top notch soulful reggae slowie.

Two of DJ’s tracks featuring U-Roy, Tom Drunk and Drive Her Home, also appear in the toaster’s recent collection (reviewed here). Hopeton also pairs well with Dennis Alcapone on A Savage Judgment Day and partners with Lord Comic on Black Power (Take 1). Super Soul finds Lewis in full James Brown mode, with only the backbeat really having a reggae sheen to it. It gives us a nice change of pace and I Must Tame You has a tinge of gospel influence that was deep with Hopeton. On the reggae dance boss track Sexy Woman, he is backed by The Sexy Girls, who appear to be a pseudonym for The Soul Sisters (Wreck A Buddy). Next is Peace To You Brother, Peace To You Sister, a rhythmic example of his socially conscious material. An exuberant 1968 version of Ride Me Donkey, also cut by The Tenors, brings us to the final strait of what is a very satisfying selection of the best of Hopeton Lewis.

The only negative things about this set, one that combines two accomplished reggae singers, that I can think of are the following. First, it might have been better to include the three recordings taken from the LP Here Comes Ken Parker for the sake of authenticity and second, Hopeton Lewis should have been credited jointly here, given that he occupies the majority of the time of functioning. Otherwise you can just sit and drink which is the sound of two masters at work. The many assets of their Treasure Isle back catalogs offer the listener a constant source of invention and pleasure.

All the words of Ian Canty – see his author profile here