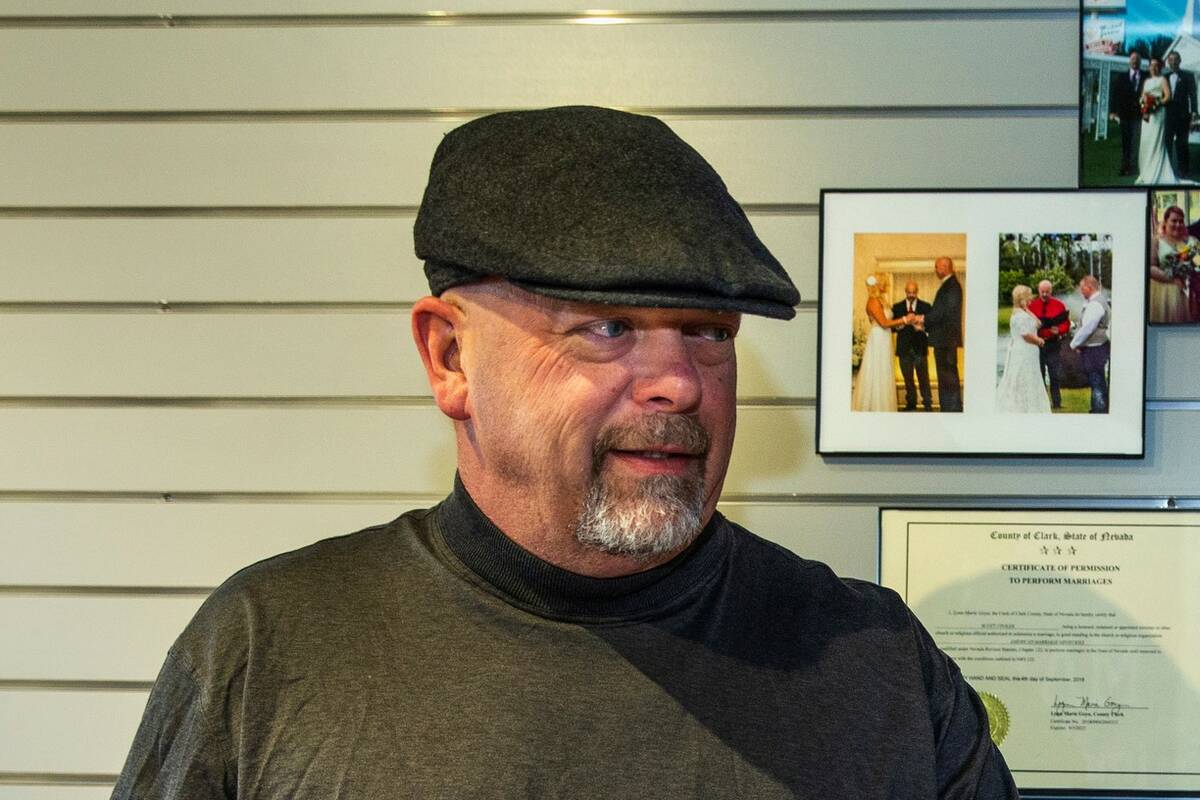 Around the time “Pawn Stars” premiered on the History Channel, the late Richard “Old Man” Harrison gave the show’s instant synopsis: “It’s like ‘Antiques Roadshow,’ but with skin in the game.”

The PBS “Roadshow” vehicle, of course, was a touring show. If you live in Billings, Montana, and find an old Philco radio, the “Roadshow” might just give you a ballpark figure.

The first stop was Denver, July 7. This week, Team Pawn will travel to Seattle and San Francisco. The long-term vision for the series was to energize the format by moving the scenes away from the familiar and cozy showroom of Gold & Silver. Series regular “Pawn Stars” is between seasons, with its “road trip” version filling in open dates.

“It’s really different, because we’re out there on the sidewalk, and people bring their treasures and see what we’re going to give them,” Chumlee said in a phone conversation last week. “And that’s the difference. ‘Antiques Roadshow’ just tells you the estimated value of an item. They give you those super high inflated values ​​that you might get at an auction.

But with “Pawn Stars,” the distinction has always been that value is tied to profit.

“We tell you what we can pay for it, knowing we have to sell it,” Chumlee said. “So obviously we have to make a profit. This is the business we are in.

Chumlee went to the limit of a favorite item on the trip to Denver.

“I saw a really cool Pokemon (Trading) card that I was really trying to buy, but the guy had the value he wanted,” Chumlee said. “I even gave it full, premium value because I wanted it for my collection. He just thought it was worth a lot more than that.

“Pawn Stars” is on track to surpass 600 episodes in 2023. The show has occasionally ventured outside of Vegas and could return to the road-tour format if those shows are a hit.

“We like to make sure we’re doing everything we can to keep people interested in the show, you know?” Chumlee said. “We have been in this business for a long time. We like to spice things up.

The local journalistic community, especially its food connoisseurs, was shaken to learn of the passing of the former Las Vegas Review-Journal food writer Greg Thilmont. The dedicated and veteran journalist died in Las Vegas on July 15. He was 52 years old. According to initial reports, Thilmont died of a heart attack. Official results are pending.

Thilmont’s brother, Matt, says his friends are discussing a memorial this fall.

Thilmont was co-author of the “Eating Las Vegas” books. As co-founder of this series, Vegas food critic John Curta said on Facebook, “Greg never encountered a roadside restaurant he didn’t like, or a hike he didn’t want to do. He was a proud westerner who could appreciate the merits of a grilled cheese sandwich or a hole in the wall Mexican with the honed palate of a discerning foodie… without ever losing the Everyman’s touch.

Another friend and colleague, food journalist and former staff member of RJ Al-Mancini, said of Thilmont, “He was an accomplished food writer, a real Las Vegas fan, and a generally good guy. Although we never worked together, I was always happy to see him at events or in restaurants. He was one of the good guys – driven by a love of the beat he covered, rather than ego or other selfish concerns.

On a personal note, I worked with Thilmont in the mid-2000s during the Greenspun Media Group era. He was one of the company’s first online publishers, with PJ Perez, another great journalist and a great guy.

Greg and I also shared the same hometown of Pocatello, Idaho. Invariably, whenever one of us visited Poky, we checked in with the other. Greg regularly reminded, “Make sure you go to Buddy’s!” speaking of the cozy, family-friendly Italian place we had both favored since we were kids.

The last time I heard of Greg on one of his Idaho road trips was about two years ago. He had just checked into the Lava Hot Springs Inn just outside of Poky, which is run by my dad, George. Greg was fascinated that my family owned a business in the small town of Lava. He said he had “a good bath” in the pools. He said he wanted to come back, someday, when we could both be there.

Every time I’m in those pools or enjoying the famous Italian dressing at Buddy’s, I think of my buddy Greg, a proud Las Vegan who had a lot of Poky in him.

Jaime Lynch of Zowie Bowie presents its first solo show at the Spirits Lounge at the Stirling Club at 6 p.m. Wednesday. “It’s been a while to come,” Lynch said on Facebook. Over the years, Lynch has sung in “Fantasy” and starred in “Peepshow” at Planet Hollywood. She also delivered two of the most memorable numbers I’ve seen in Vegas.

Lynch learned and sang “Boogie Oogie Oogie” on the fly at an Oct. 1 charity karaoke event at Ellis Island in 2017. The performance drew a $10,000 donation from an associate of the UFC president . Dana White. And Lynch held on to finish “Dream On” during a powerful windstorm at Circa’s Stadium Swim on New Year’s Eve 2020. Spirits Lounge is, thankfully, air-conditioned.