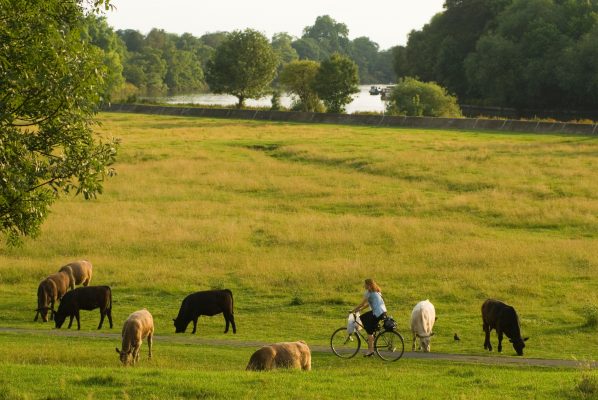 Small but perfectly formed: the villages of Richmond that are home to military aviation, migrating toads and the ghost of a King Charles spaniel

They may be tiny, leafy and quiet, but the villages of Ham and Petersham have been ahead of their time for centuries, notes Carla Passino.

Seen from the Thames, Ham House is a mere impression of a building, a glimpse of red, the shadow of a chimney peeking from behind the trees that irritated Horace Walpole so much. “The house was so crowded with trees and doors that you think you are a hundred miles away and a hundred miles away,” he complained in 1770.

Despite the difficult relationship some owners of Ham House had with the river, there is no doubt that the villages of Ham and Petersham are inextricably linked to both the River Thames (there had been a settlement here since the Upper Palaeolithic) and to the estate itself, which once spanned 640 acres from Richmond to Kingston.

Originally built in 1610 for Thomas Vavasour, Knight Marshal of James I, Ham House belies its name and stands on land that once belonged to Petersham Manor, creating an ideal link between the two villages. ‘[The estate] was only rented by Vavasour at the time, so it was a pretty brave decision to build such a big house on land you didn’t own,” says Hannah Mawdsley, curator of the property. Vavasour’s bet was William Murray’s win.

A close childhood friend of Charles I, he rented the estate from 1626 and in the late 1630s redecorated the house using the same craftsmen as the king, unwittingly giving posterity a glimpse of what the Whitehall royal palace (which burnt down in the 1690s) might have looked like. The miniature-studded Green Closet, in particular, is a window into the world of 17th-century collecting and Charles I’s own taste, as there is evidence that Murray and the King exchanged paintings.

Having obtained a Scottish title, Earl of Dysart, Murray was able to pass it on to his daughter, Elizabeth, who later became Duchess of Lauderdale. A formidable woman, she succeeded in preventing the house from being sequestered by the parliamentarians after the execution of Charles I. She is buried in the tiny Grade II*-listed St Peter’s Church in Petersham, which charmed Pevsner for its pre-Victorian interior, but her presence still marks the house centuries later, not least because she was so far ahead on his time and had a ‘bathroom’ built for his own use.

However, some say she may have left behind something more than a bathroom, as the story goes that her King Charles spaniel still haunts her former home: “There is a legend that we had once a complaint from a visitor who was told dogs weren’t allowed in the house yet she had just seen [one]- and I was very surprised to learn that “it wasn’t a real dog”, recalls Dr Mawdsley (although she hastens to add that she never saw any occurrences ghostly itself).

The Duchess also extended the estate, and today Ham House shares two stretches of green that were once her domain: towards Kingston, the Ham Lands Nature Reserve, which in spring explodes into a riot of wildflowers, and, on the side from Richmond, the Petersham Meadows, where cows still graze in summer, helping to preserve the views that so inspired Turner and Reynolds.

Walking the sequence of paths that connect Ham House to Ham Common, another nature reserve, it’s hard to imagine that the perfectly manicured grass of Ham Polo Club, full of pretty ponies, was once a great orchard that fed the house . At the end of the avenue, however, Ham Common – its triangular greenery embroidered with pretty Georgian houses, the woods beyond thick with stately oaks – looks like a slice of 18th-century London (although it has changed a great deal in the last 80 years).

By the 1700s many of the country’s great and good had discovered this scenic stretch of countryside, including John Campbell, 2nd Duke of Argyll, who had Sudbrook House built in the Petersham part of Richmond Park, almost opposite Ham Common , circa 1725. Now Grade I listed, the building is the august clubhouse of the Richmond Golf Club, which has a membership list to match its grand home – among others, George VI was captain in 1924, when he was still Duke of York, and the Queen Mother was patroness until her death.

Despite their undoubted decorative value, the relationship between the great houses – particularly Ham House – and the local commoners was not always idyllic. The 9th Earl of Dysart, explains Dr Mawdsley, tried to fence off the common pasture, but the villagers managed to push him back. Today the local council (Richmond for Petersham and part of Ham, the rest falling in Kingston) erects its own ‘precinct’ every March, fencing off part of Church Road, but residents are unlikely to complain – the reason the road is closed is to allow safe passage for the toads that live on Ham Common, who migrate to reach the pools where they will spawn.

Exterior of Algernon Tollemache Hospice in the West London village of Ham.

It’s the kind of thoughtfulness you’d expect from Concordium, a vegetarian commune that called Alcott House on Ham Common home in the 19th century. Founded by followers of the mystic James Pierrepont Greaves, the community combined socialist and almost monastic elements, renouncing property, luxury and even cooking to embrace a life of austerity. Nevertheless, perhaps Alcott House’s raw cabbage meals had become too heavy to bear, or perhaps it was the early morning awakenings and cold baths, but, by the mid-1840s, the commune had disbanded. , ending an experiment. who anticipated the current trend of plant-based raw food by 200 years.

The villages were still rural when Country Life visited Ham House in 1899, praising it for its “shady beauty”, but the turn of the 20th century changed all that. Gravel pits sprang up along the river and an aircraft factory opened off Ham Common, sending planes – first Sopwith Snipes, Dolphins and Salamanders, then, after a spell producing trucks and military trucks, Hawker Hunters and Harriers – to bases around the world. Ham remained at the forefront of military aviation for decades, designing new aircraft and testing them for stress and fatigue with the Mithraeum structural test frame, until the factory closed in 1992, leaving room for housing.

The area had already grown by then, having gained its most famous development in the 1950s. When the pretty Langham House, once home to the Marquess of Tweeddale, was sold, part of its land was entrusted to a property developer, who commissioned the young firm of brutalist architects James Gowan and James Stirling to design three blocks of flats. Their ‘rugged new style’ has won acclaim, helping Langham House Close beat its 18th century namesake by a star – it is Grade II* listed, against Langham House’s Grade II listing. After baths, vegetarianism and military jets, the old rural backwater was once again spearheading innovation.