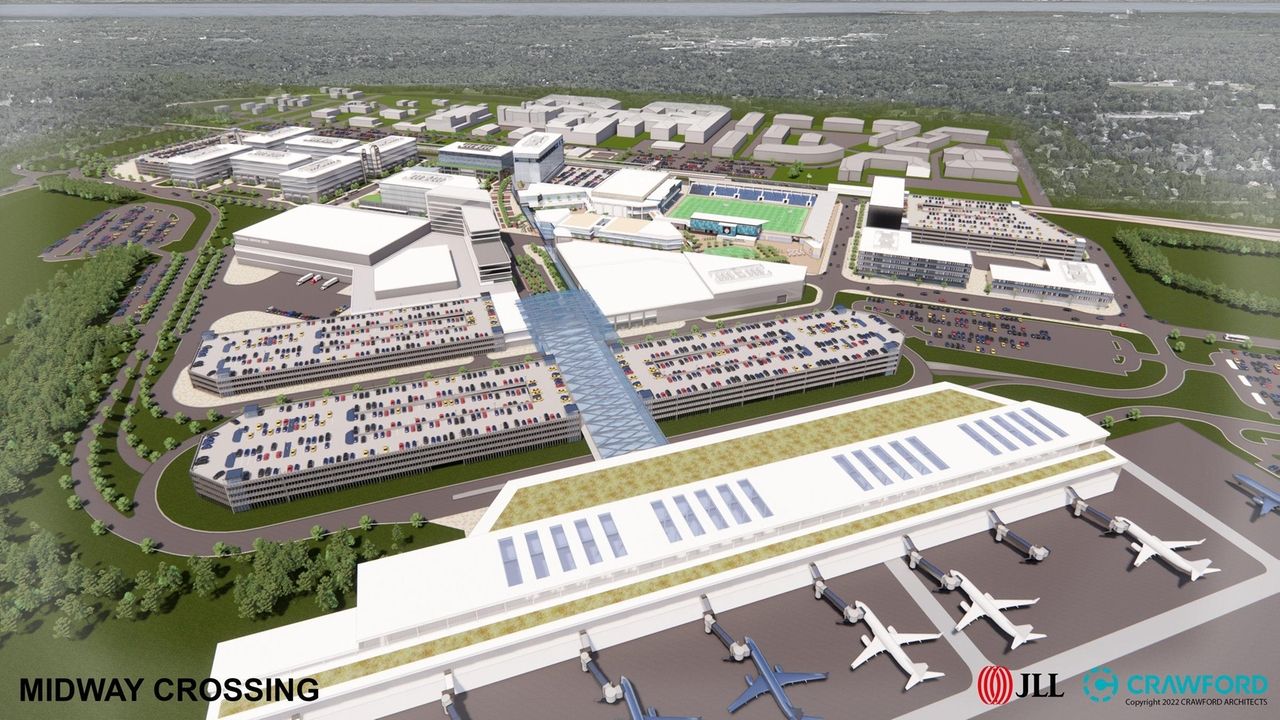 The new MacArthur terminal is part of a promising development proposal

Too often, Long Island shy away from thinking big, perhaps because it’s so hard to get anything done. When meaningful ideas emerge, they often stay on the drawing board.

Midway Crossing could be different.

The multifaceted $2.8 billion project in Ronkonkoma, on mostly asphalt-covered land, is not just another new development. Nor is it a collection of individual pieces – a life science center, a new entertainment venue, a hotel, and a convention center – each of which alone would boost the island’s economy. In total, Midway Crossing could create 14,500 construction jobs and 29,300 permanent jobs, as well as an estimated annual economic activity of $4.5 billion.

What makes Midway Crossing special is how it could reshape Long Island and the region’s connectivity to New York and beyond.

The project, as envisioned by lead developer Jones Lang LaSalle and engineering firm Woodbury led by John Cameron, would be between Long Island Rail Road’s Ronkonkoma Station and Long Island MacArthur Airport. This would pave the way for a new terminal on the north side of MacArthur’s property and a link track to LIRR station. This train-to-plane connection could be a game-changer for Ronkonkoma and the island.

The project deliberately does not include any housing, in part because Tritec Real Estate’s portion of the adjacent Ronkonkoma hub will include 1,450 units. But even that’s only a small fraction of what the region needs, so it’s a shame Midway eschews housing altogether.

Still, the plan has advantages that could move it forward, including initial support from Suffolk County and the town of Islip. It builds on existing transit improvements like the Long Island Rail Road’s double track, third track, and east side access — all of which have turned great ideas into reality.

Perhaps more importantly, potential funding streams exist, such as federal infrastructure funds and a new pot of state money earmarked for the island. Cameron, who also heads the Long Island Regional Planning Council, said he expects $1 billion to come from public sources to pay for the airport terminal, convention center and infrastructure, like water, sewer, electricity and parking lots. Obtaining these funds in a relatively short period of time will not be easy.

Other important questions remain. Careful analysis is needed of the huge infrastructure needs and environmental impacts – in particular the connection plan to the South West Sewer District, as well as water usage and the often expensive parking lots. If current sewer connection plans are not viable, developers could consider an on-site sewage treatment plant. Developers will also need to be flexible and assess how work, living, travel and commuting habits in the wake of the pandemic might impact their plans.

There is a lot to do before any part of this massive vision becomes reality. But Midway Crossing deserves a chance to fly.

EDITORIAL BOARD MEMBERS are experienced journalists who offer reasoned, fact-based opinions to encourage informed debate on the issues facing our community.

Editorial board members are experienced journalists who offer reasoned, fact-based advice to encourage informed debate on the issues facing our community.

20+ things to do this Memorial Day weekend on Long Island

Birds of prey patrol the terraces of Granville Island